Every four years, the international news cycle is dominated by the phenomenon that is the American elections. But the 2020 elections have undoubtedly drawn a higher than usual interest from casual political observers, such as myself. The reason for this is the polarising figure that is President Donald J. Trump.

If you’ve been following events closely, you may have noticed numbers attached to photos of each candidate. As though Donald Trump and Joe Biden are engaged in a Basketball match. Those numbers represent the number of Electoral votes each candidate has garnered. Ah yes, welcome to the world of the Electoral College.

Honestly, before the 2016 elections, I was vaguely aware of the Electoral College. Until I found out Donald Trump had been elected President, even though Hilary Clinton had won more popular votes. Going back further back in history to the 2000 elections, and the commotion surrounding Florida. The battle between George W. Bush and Al Gore ended up in the Supreme Court. I couldn’t wrap my head around the fact that for a country as large as the United States, an election came down to a single state. But I was a young man, and let’s just say I had other priorities in life other than reading up on the Electoral College.

The Electoral College is a group of electors who congregate every four years to elect the President and the Vice-President of the United States. There are a total of 538 Electors. The number of Electors from each state is determined by the state’s membership of the House of Representatives and the Senate.

In order to be elected, a presidential candidate needs a minimum of 270 Electoral votes. U.S. territories such as Puerto Rico are not allocated Electors, despite being American citizens.

The rationale behind the Electoral College was established in the 19th century, in the newly created republic after the War of Independence against the British empire. That’s right, a law passed more than 200 years ago is still in effect in 2020.

James Madison was the brains behind the Electoral College. Madison opined that the average citizen in the street was unfamiliar with the dynamics of Washington D.C. politics. Madison also felt most Americans would not know the presidential candidates, and thus Electors would be better placed to vote on behalf of the population. It made sense, considering there was no radio or tv, or the internet. 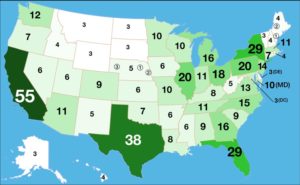 Each State shall appoint, in such Manner as the Legislature thereof may direct, a Number of Electors, equal to the whole Number of Senators and Representatives to which the State may be entitled in the Congress: but no Senator or Representative, or Person holding an Office of Trust or Profit under the United States, shall be appointed an Elector.

Did you get all that? Maybe Trevor Noah can explain it better.

Unsurprisingly, the Electoral College has courted much controversy. As a South African, determining the outcome of an election is as simple as one person one vote. That’s how democracies around the world elect their leaders. Apart from the U.S. obviously. What’s also baffling, is that Americans utilise the one person one vote creed to elect Mayors and Governors.

Due to the liberal or conservative nature of particular states, the outcomes of some Electoral votes are predictable. For example, California’s votes are always won by the Democratic Party, and Alabama is claimed by the Republican Party. But there are states that fall somewhere in the middle, such as Florida and Pennsylvania. These states are referred to as the battleground states or the swing states.

Political candidates focus the bulk of their campaign resources to these states. It is often claimed Hilary Clinton lost the crucial state of Wisconsin in 2016 due to her failure to campaign in the Badger state.

There have been efforts to abolish the Electoral College, but this is a complicated and lengthy process. A constitutional amendment is required. Which means it would take a vote of two-thirds

majority in the House of Representatives, a vote of the two-thirds majority in the Senate, and finally the ratification of three-quarters of the states. And considering the Democrats and Republicans couldn’t agree on the colour of grass, the Electoral College is not going anywhere in the foreseeable future.

The repercussions of the Electoral College votes are substantial. The Republican presidential nominee has only won one popular vote in the 21st century, Bush in 2004 against John Kerry, but the Republicans have held the White House for twelve out of the last twenty years.

Where American politics is headed from here, is anyone’s guess. What I do know, is that four years from now, they get to do it all over again.

Let us know your thoughts in the comments section